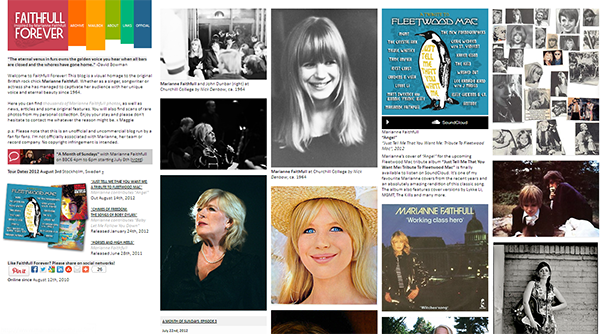 Faithfull Forever - Inspired by Marianne Faithfull is a blog dedicated to the British singer, songwriter and actress Marianne Faithfull. The focus lies on photos, but news and original features are posted as well. The blog is hosted on Tumblr and can also be reached through faithfullforever.tumblr.com

The main content of Faithfull is photos which have been collected from other websites or have been scanned from magazines, clippings and other. A lot of the scans posted are either very rare or have never been seen before at all. Apart from photos informative features such as "Faithfull Facts", news and other interesting content are posted.

Retrieved from "https://musicblog.fandom.com/wiki/Faithfull_Forever?oldid=6185"
Community content is available under CC-BY-SA unless otherwise noted.